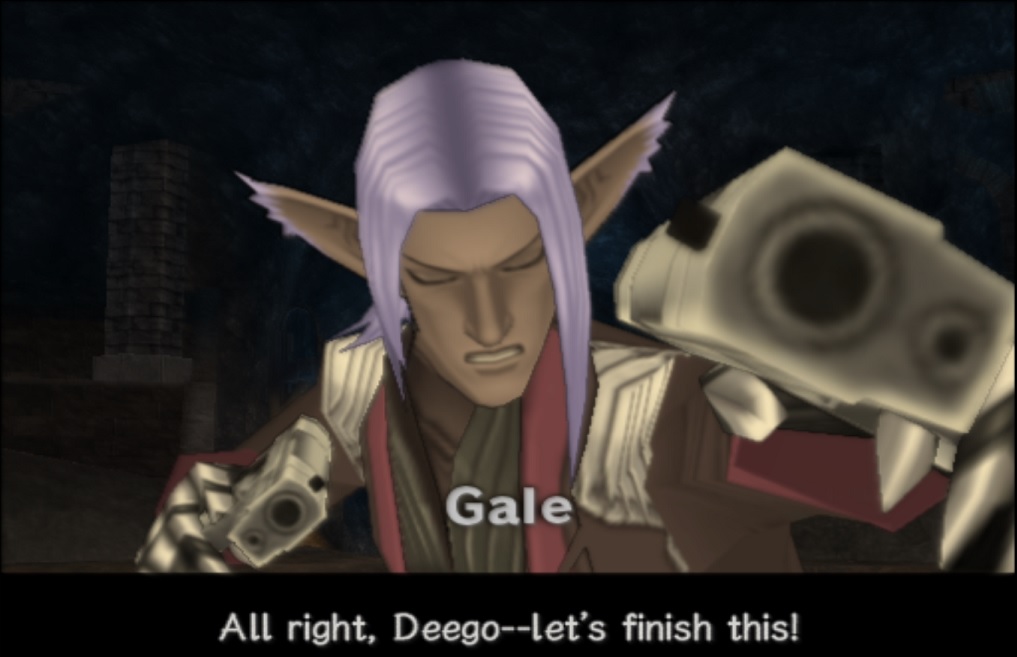 This is probably the most annoying boss fight of the game. There are a few other bosses similar to Gale but this one you're stuck with a crappy character and the forced blocking will take you off guard since it's so early in the game. You literally spend the entire fight blocking and taking quick pot shots at the boss. It's horribly frustrating. As you obviously know because you ended up on this page.

Ok so to get started, remember this word... block. You're going to be blocking pretty much any time Gale isn't talking. Or right after he finishes unloading both his guns into you and needs a moment to reload. As seen in the picture below.

There are two moments you are free to hit Gale without getting your shit kicked in. The first of these moments is after he finishes unloading both his clips into you. Keep in mind that if you don't block that attack it kills you. Or, well, should kill you - unless you spent hours grinding. The second moment you'll have to hit Gale is any time he opens his stupid mouth. He'll taunt you during the fight quite a bit and you'll want to use this moment to shove your giant axe down his dirty shit loving throat.

Now, for offense what you'll want to do is constantly use Top Dog. Top Dog is only expended on attacks, not for time so keep this in mind, you can have it up for the entire fight - every single hit if you want which I highly recommend you do. Also Gale can fire either 6 or 7 bullets with each of his two guns, if you count them while blocking you will know the perfect time to attack. I tried to get him to do mostly jumping attacks because he fires both pistols when you do that, if you corner him he'll mostly attack in that predictable fashion.

Also, it's very important that you're ok with only getting one or two hits in at a time before having to block again, most of the time just a single hit. Don't try to combo Gale or you'll blow through healing potions like crazy. Slow and steady is what wins this race.

Keep in mind this isn't the only boss fight in the game that is like this. I created a guide specifically for Gale because he's the first boss fight like this but surely not the last. When you're stuck with just 1 character during a boss fight expect to be playing much like you were during the Gale fight.