On the lower floor of Crypt of Decay (reached by clicking the throne made of bone in the room you zone in at) you'll find the Spectre of Corruption. Defeating this enemy will begin the Bertoxxulous raid event which requires you to defeat multiple waves of enemies and finally Bertoxxulous himself.

After you defeat the Sceptre of Corruption it'll take 5 minutes for the raid event to begin after which you'll have a total of two hours to complete the event. I've included a map below of the entire area that this event takes place. There's a 1 on the map where each Summoner of Berotxxulous spawns - which is also the location that you should expect waves of enemies to spawn.

For the first half of this event you'll only have to defeat waves of about 6 - 8 undead enemies. It's easiest if you pull them through the hallways and have Enchanters CC them as they're being kited. The bottom half of Crypt of Decay is pretty large although quite compact; it'll give you enough room to split and kite enemies.

Some additional advice is to have everyone med as much as possible whenever possible as this event will really test your Mana/DPS capabilities.

Stronger raids normally use the strategy of pulling all the enemies into the center and AoEing them down. This strategy is reserved for better equipped raids though as it'll really be draining on your over all mana. Once you've taken out 5 or so waves of enemies Mini Bosses will start to spawn with some of the waves.

These guys have unique names and usually a larger model than the rest of the enemies which makes them easier to point out. There are a total of 12 Mini Bosses and each of them does something unique (though not all have annoying abilities). You can find a list of all the Mini Bosses as well as any unique abilities they use/unique properties of each.

Feig Adan
- Can be slowed
- Enrages

Your strategy for this even will probably depend on your own raids strengths and weaknesses. As aforementioned after starting the event you have a total of two hours to finish it, each new wave of enemy will spawn after you finish defeating the previous so this raid event is essentially a race against time!

Throughout the event the different enemies you fight have a small chance of dropping some group tier loot. All of the items that I saw them drop can be found listed below. Note that the Mini Bosses have their own unique loot tables in some cases as well.

After about 6 or so Mini Bosses you'll notice that the size of each wave starts to increase from 6 - 8 enemies to about 10 - 12. You'll also notice that enemies start to spawn in the hallways and path to the Summoners of Bertoxxulous instead of just spawning at them.

Finally, after completing all 12 waves you'll be ready to face off against Bertoxxulous! He spawns in the center of Crypt of Decay -- a little bit east of the large pillar that you click to zone back to Plane of Tranquility. 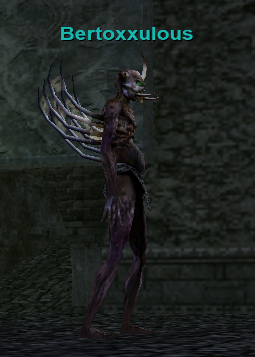 As you could probably imagine Bertoxxulous himself is a pretty tough fight. Bertoxxulous has a -500 resist check DoT that does a whole bunch of nasty stuff. This DoT drains your HP by 500 a tick and Mana by a small amount (usually a couple hundred). This DoT also decreases your Attack by 150. You'll need to get this DoT off people as quickly as possible as it's a nasty one.

Have Melee stay at max range if possible since Bertoxxulous has a large Rampage hitbox that you'll need to do your best to avoid. He has a ton of HP so the fight could take awhile. Once he's defeated be sure to hail the planar projection for your flag.