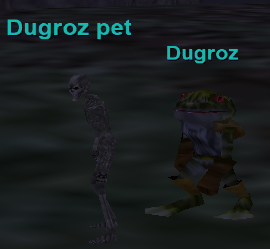 In order for players to gain access to Howling Stones (Charasis) they'll need to complete a rather annoying key quest that involves farming two different drops; one is found in Kaesora while the other is found in Lake of Ill Omen. Both of these drops are listed below in an easier to read format.

Once you've obtained both of these drops you'll need to bring them to Dugroz, an NPC in the Swamp of No Hope to turn them in. That's all there is to this quest! It's actually quite simple to accomplish - the hardest part of it is arguably running around and waiting for spawn timers/the rare mob you need to spawn for each drop.

To get started let's take a look at the Xalgozian Fang which drops in Kaesora. You can find Kaesora in the eastern portion of the Field of Bone - nearby the Emerald Jungle and Swamp of No Hope zone lines. Head on inside of Kaesora then take a gander at my map below for some directions. 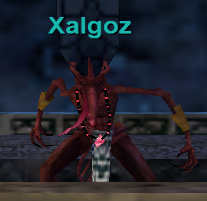 We're going to be heading alllll the way to the west in Kaesora where it shows Xalgoz marked on my map. You'll have to drop down a hole right when you enter Kaesora and another hole on the western end of the zone when you get near where it says Xalgoz on my map above.

Xalgoz is found on the podium type of structure at the back end of the auditorium looking room that's found at the bottom of the second pit. Sometimes a guardian of Xalgoz spawns in his place and you'll have to keep defeating that in an attempt to get Xalgoz to spawn. I think it's a 15 - 20 minute respawn time for the enemies here but I don't know the exact timer.

As aforementioned the item you want to loot from in is the Xalgozian Fang. It's no drop and a picture of what it looks like is shown below.

The next piece of the puzzle is found in Lake of Ill Omen. You'll need to venture all the way southwest in the zone to the Sarnak fort which is where you'll find Chancellor Di`zok. Di`zok can be found in front of the throne in the large room of the Sarnak Fortress, furthest west.

Standing next to Chancellor Di`zok is Advisor Sh`Orok. The Advisor isn't as high of a level of the Chancellor is and he isn't involved in this quest but he does drop an Iron Bound Tome that's used in a different quest. All Sarnaks in this fortress have a chance of dropping a Sarnak Ceremonial Dagger which is one of the best low level Range slot items you can get for Casters in the early days.

Depending on the server you play on determines exactly how farming Chanceller Di`zok will work. If you're playing on an official Daybreak server, with the September 2017 patch they made it so a sarnak chancellor will spawn at the throne when Chancellor Di`zok is not around. Those of you playing on an emulator will find that Di`zok always spawns but has an hour and a half wait inbetween spawns.

Regardless of your server, once you actually get Chancellor Di`zok to spawn you'll find that he has an extremely high chance of dropping the Jade Chokidai Prod and I have seen him drop even two of them in some rare instances.

Note: Apparently Chancellor Di`zok can spawn in place of ANY sarnak in the zone. I found my Chancellor of Di`zok up in the goblin tunnels in the northern portion of Lake of Ill Omen near Lord Gorelik. The screen shot below shows him in that territory.

If you're having trouble finding him... I guess get a reliable tracker.... I think Daybreak was intending to make the quest easier but they made it way harder imo. Once you get your Jade Chokidai Prod take it to Dugroz in the Swamp of No Hope with the Xalgozian Fang. Hand him both items and he'll reward you with the Key to Charasis.