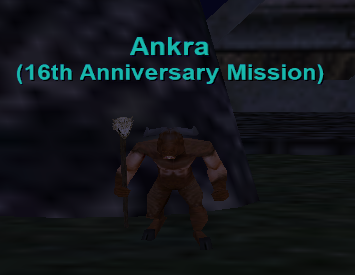 Dead Dragons is one of the most straight forward Anniversary quests ever with an extremely good reward, Necromantic Dragon Bone. This is actually a 'bonus' reward for completing this HA, however all you have to do is say 1 thing to an NPC at the end of the adventure to receive the item. The Necromantic Dragon Bone is a single target Lifetap DD which does 20k damage (3min cooldown).

The majority of time you spend in this HA is going to be running across the zone to each spot that Ankra visits. Each time you stop you usually have to fight a few enemies and talk to Ankra to get him moving again.

1. Speak with Ankra
2. Travel to the southeastern location marked #1 on the map
3. Defeat 2 enraged wyverns
4. Pick up a Pristine Dragon Scale from the ground and give it to Ankra
5. Speak with Ankra
6. Travel to the northwestern location marked #2 on my map
7. Defeat 2 ice burrower enemies here
8. Loot Preserved Dragon Remains & give it to Ankra
9. Defeat the ghostly dragon that spawns
10. Hail Ankra
11. Travel south to the Drake Next marked #3 on my map
12. Defeat 2 Defending Drakes
13. Defeat the Aging Dragon
14. Give the Aging Dragon Blood to Ankra
15. Defeat Ankra & Ankra's Undead Dragon
16. Speak to the Mercenary Captain to complete the mission
(Bonus) Speak with a mercenary and say 'Argh' to receive the Necromantic Dragon Bone

Travel to the southeastern area marked #1 on my map above to get a task update and to spawn a bunch of enraged wyverns. They don't see through invisiblity so it's recommended that you approach Ankra while invised. As with all enemies in this HA the enraged wyverns have an extremely large agro radius so keep that in mind.

Enraged Wyvern: Max Hit is about 14000 and they're mezzable, rootable and they do not summon.

After you defeat two wyverns your task will update and you'll have to pick up a Pristine Dragon Scale from the ground and hand it to Ankra. There are about 8 different spawns of this item lying around on the ground nearby - it's actually quite difficult to miss. If you can't find what we're looking for though, use the picture below.

When you turn the item into Ankra hail him again and he'll start running off to the second area, #2 on my map above.

When you arrive a bunch of Ice Burrowers will spawn throughout the area, much like the enraged wyverns before them. Again they do not see through invis and have an absurdly large agro radius. The Ice Burrowers will usually drop a Preserved Dragon Remains which you'll then need to give Ankra after defeating two of them.

Ice Burrower: Max Hit is about 14000 and they're mezzable, rootable and they do not summon.

If the Ice Burrowers do not drop the Preserved Dragon Remains for you then you'll need to pick one up off the ground nearby. Unlike the Pristine Dragon Scales this item is much more difficult to see on the ground since it is very small.

When you give Ankra the Preserved Dragon Remains a ghostly dragon will spawn ontop of him. This enemy is about the same difficulty as the ice burrowers and enraged wyverns before it. Once you've defeated the dragon hail Ankra again and he'll start running to the final location marked with a #3 on my map above.

Approaching the area with Ankra will trigger an update and spawn mobs just like it did each time before. The enemy this time is called a nesting drake which are the same difficulty as basically every mob we've fought so far in this HA. Defeat them for a task update then defeat the aging dragon that spawns too for another task update.

The aging dragon will drop Aging Dragon Blood which you'll need to loot and hand to Ankra for an update. Now Ankra summons an undead dragon and attacks you with it. Additionally a small band of mercenaries come out of thin air and begin to assist you with taking out Ankra. DO NOT LET THESE NPCS DIE!!!!!!!