In Everquest there are 5 different types of Magics. Alteration, Conjuration, Divination, Evocation and Abjuration. Each one of them serves a specific purpose in EQ. If you've played Elder Scrolls before you'll kind of already know the purpose of each of these. Your spells rely heavily on these abilities. If they're not high enough your spells will constantly fizzle.

When Everquest went Free to Play they made it possible for all of your spells to be purchased in Plane of Knowledge up to the Expansion that is currently enabled in Free to Play. If you're a bit confused right now let me elaborate some more. Free to Play (F2P) players will always be two expansions behind current Everquest. EQ always comes out with new expansions so they will update F2P as they update the actual game. In Plane of Knowledge you will be able to buy all spells up to the last two expansions. Past that you will have to go to where ever they buy spells to get your most recent abilities.

Alteration: Alteration generally consists of friendly and offensive casts that don't fall into any of the other catagories. It's kind of the catagory things go that just don't fit in elsewhere. It's one of the most important and widely used catagories of spell casts.

Abjuration: Abjuration consists of Buffs, generally all "big" buffs like Protection buffs that do more than 1 attribute.

Conjuration: Conjuration is exactly how it sounds. This type of magic is used for Conjuring things. Pets, Items, Bags, DoTs and some Nukes fall into this catagory.

Divination: Divination is the school of magic that will take forever to raise because so few things use it. Mostly abilities that involve movement of some kind or cloaking yourself.

Evocation: Evocation is the school of magic for blowing stuff up. Almost all nuke spells are Evocation.

If you're a caster (or can even cast spells), you'll have two additional skills, Channeling and Meditation. Meditation used to increase your mana regen out of combat and In-combat. Now it just increases your In-combat regeneration and how fast you scribe/memorize spells. Channeling decreases the chance of the spell being interrupted when you're hit or you move. 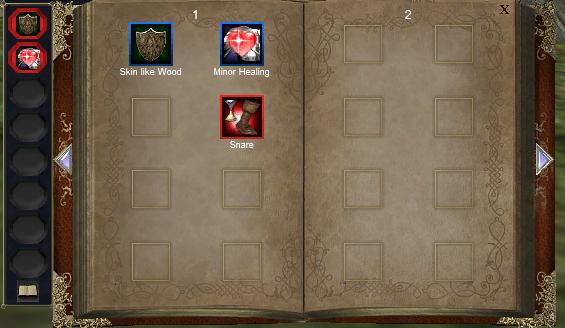