AA's where implemented during the Luclin expansion. AA stands for Alternate Advancement. In other words it's an alternative way to advance your character further. AA's can increase your stats, Give you a Free mount, Give you a chance to crit, give your spells a chance to crit and a ton more. There are around 10000 AA's that you're able to acquire and generally each expansion adds a lot more for players to.

What this means is there is ALWAYS something for you to do in Everquest. Along with AA's you also have raid and leadership XP. I'll get to that later. First lets start with how to see your AA's. Hit "i" to open your inventory and look at the bottom of the window.

Where you see Alt. Adv. that's the one you want. Left click on this to bring up a whole other box. You'll see 4 Tabs, General, Archetype, Class and Special. Each tab has different types of AA's in it, click on them to see what's in them for yourself! 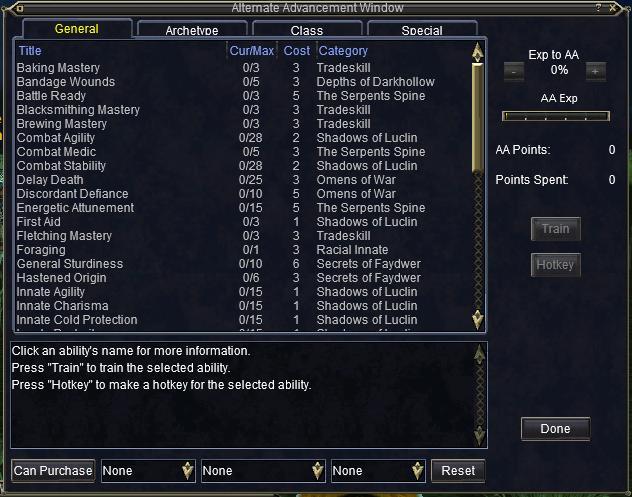 In the AA Window you'll also notice the 4 different categories at the top. They say Title, Cur/Max, Cost and Category. The title is the name of the AA, Cur/Max is how many you have points you have into that AA and what the maximum amount of points you can put into it is. Cost is how many AA's it costs to put 1 point into it. Finally Category is what expansion the AA came out during.

Now that you know where to find AA's and about them it's time to teach you have to earn them! AA's are earned in a very similar way as levels. Hit "i" again and below where it shows you the XP for your level you'll see your AA XP.

Now open your AA window up again and look at the top right hand corner. You'll see Exp to AA and a plus and a minus. You can use the plus and the minus to raise or lower how much XP you want to put into AA's. Keep in mind you can only raise or lower the amount of XP in 10% intervals.

When you gain an AA you can spend it by clicking on a skill in the AA window and on the right hand side click Train. Now that you know just about everything there is to know about AA's, next up a lesson in Leadership and Raid XP.

Note: You must be at least level 51 before you can start earning AA XP and you can only have a maximum of 30 AA's banked at a time.

Leadership XP works in a way very similar to AA's. The main difference being is you must be in a group of 3 or more players (Merc's count) to start to earn leadership xp. To bring up the Leadership XP window hit "L".

Notice the tabs up top just like the AA window and on the right hand side the ability to turn Leadership XP on or off. When you have Leadership xp on your total xp will be reduced by 20% but you'll gain leadership points. You can spend these points similar to AA's on the abilities listed in the window. With Leadership XP you can also Mentor someone.

To mentor someone click on the Group Mentoring button. It will come up with a new window, Select a Protege out of the list of group members and select the amount of XP you'd like to give them while mentoring. Also please note that when you pick the amount of XP you're giving them you're picking that xp from the 20% that is going into Leadership XP, not the 100% you're earning from a mob.

If you'd like to see my recommendation of where to put your first 100 AA's use my AA Placement Guide!