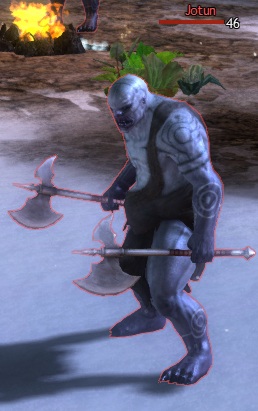 The Jotun's are right next to the Wide Expanse Waypoint (a little to the northwest of the waypoint and across the road further northwest). They mostly come in single pulls but inside the tents/structures you can usually find two of them at a time if you want to do a little bit of AoEing. After you clear the Jotun camp closest to Wide Expanse you will want to move across the road and take out the Jotun camp over there.

As far as gathering goes there is a large patch of Cabbage in the Jotun camp next to the Wide Expanse Waypoint which respawns once every 24 hours. It's worth gathering this each time you come to this location since there aren't many spawn points for Cabbage around the game. Also Dredgehaunt Cliffs has some of the most valuable materials in the game that can be found here. So much so that I put together a whole guide for gathering in Dredgehaunt Cliffs.

You'll find a lot of Gold Ore, Seasoned Wood Logs and less commonly Rosemary Sprig which sells for a good amount on the Auction House. Below is a picture of where you can find both of the Jotun camps. There are also a few events in the local area but not many I found were worth joining in on. If you're in this level range it will be worth joining in on the events but at a higher level (something like 65+) you mine as well just avoid them.