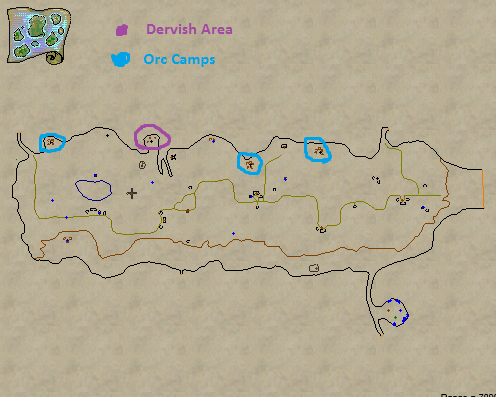 The Commonlands is actually a pretty decent spot to level for players 10 - 20. If you're in your low teens and without a group try to hunt around the zone line to West Freeport in the eastern portion of the zone. You'll find a bunch of animals that roam around this area which are pretty easy to kill and easily single pullable.

Those with a group can hit up the Dervish Camps or the Orc camps which are marked with the blue and purple circles on the map above. The Dervish Cutthroat enemies in Commonlands drop Cutthroat Insignia Rings which are +2 Dex 1 Ac rings. They're great for melee if you have nothing else for this level!

Make sure you don't bite off more than you can chew if you try and take on one of these camps! Expect to have gray con animals that roam around interrupting your healer and anyone they don't like as they're unfriendly to most Non Druid/Rangers. You'll also have roaming low level skeletons attacking random group members to worry about.

You will also find high level monsters occasionally roaming the plains, Hill Giants and Griffons that you'll need to watch out for as a lower level player. You probably won't be able to take these guys on at all since they're in their low 30s. It's best to avoid them or if it's a Hill Giant call them out in /ooc when you see one. Higher level players will come through to kill them for the plat.

There is also a camp of Shadowmen in the southwestern portion of Commonlands (it's the camp in the bottom left corner on the map above) that are home to much higher level mobs than the Dervish and Orcs. These enemies are in their late 20s and make one of the highest level camps in Commonlands.

- For Classic through Luclin the Commonlands Tunnel (or east commonlands) is the place most people meet up to sell loot and purchase items.

- Lightstone enemies in this zone have a chance of dropping a Greater Lightstone which is used in creating a piece of Wu's Fighting Armor and, if not valuable to you, will be valuable to someone early on in the game.

- The Commonlands is one of the best places to farm Thick Grizzly Bear Skins and High Quality Bear Skin at in the early part of Everquest.

- Commonlands was remade into Old Commonlands during the Seeds of Destruction Expansion pack.