Mercenaries are the answer to Everquests "grind" and Must-Group to level. Everything has changed with the Seeds of Destruction expansion. Grouping is still one of the best ways to get experience, but the mercs help you when you can't find a group. Mercs make leveling a million times easier so you can catch your friends and start playing with them!

There are four types of Mercs to choose from: Healing, Tanking, Rogue or a Wizard mercs. Healing mercs heal and tanking mercs tank pretty simplistic. The Rogue merc does melee damage where as the Wizard merc will nuke, all pretty basic. When first starting out a healer merc may seem logical, well it's not. Your tank merc can solo any reds from levels 1-60. In other words that means all those levels that you can't find groups, you can use him for. This makes it so any new player can jump in and catch his friends or others as quickly and painlessly possible. You can hire a Mercenary at any Mercenary Liaison.

Where to Find a Mercenary Liaison

If you're a new player then you'll be able to find a Mercenary Liaison right in Cresent Reach (granted if you Start there). The Mercenary Liaison in Cresent Reach is due east of you, if you follow the path you'll run right into him. If you hit "M" you can see your map. Look at my map in comparison to your map to see the location. Inside the hut talk to Mercenary Mdjal to hire a mercenary. 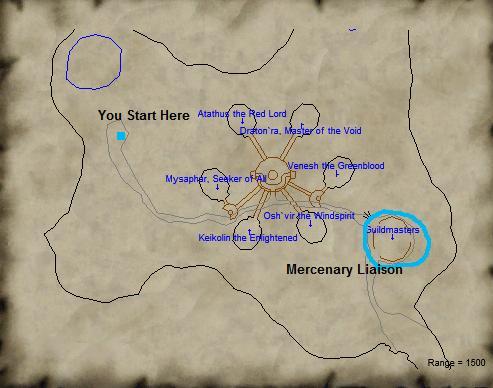 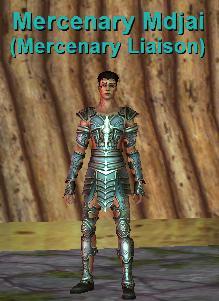 This is a picture of the window you'll see when first purchasing a Mercenary. Where it says "Type" select Journeyman (Paying players only) and then select Tier I of which ever you want Healer or Tank. If you are an Everquest Free to Play player then you will be unable to select a Journeyman Mercenary. you will only be able to select an Apprentice Mercenary. Moving on, on the right hand side it will show you his Race, Type, Confidence and Proficiency.

Confidence is how many mobs you can pull above your level and the mercs without him running away. You'll usually be fine pulling 1 or 2 Whites or above, any more and the merc has a small chance of running. What that means is he just won't do anything. The higher the mercenaries confidence level the less chance he has of running away.

The reason you select Journeyman is because the Journeyman mercenaries are better, stronger, faster and more advanced (Literally). For a quick example, an Apprentice Tier V mercenary caps out at a 90% rez where as a Journeyman Tier I mercenary will have a 96% rez. As aforementioned if you are a Free to Play(F2P) player you will only be able to select an Apprentice Mercenary. These Mercenaries are much more weak than a Journeyman Mercenary however I guess one plus is they cost a lot less every 15 minutes!

Example of a Mercenary Window

This is a picture of the merc window. Here is a quick run down of everything.

Time Left: How much time until you have to pay the Merc's Upkeep. Usually a small sum of plat.

Set Active: Set the current stance you have selected

Info: Gives you the information about your merc. (Intelligence level, Upkeep and all that)

Set Hotkey: Set the current stance you have selected as a Hot Key.

Dismiss: Permanently get rid of this mercenary.

Stance: You're allowed to set the stance that you want your mercenary to be. Each Stance has different focuses and allow the mercs to be more or less reactive.

Balanced: This stance is exactly how it sounds. Your merc will balance his abilities in defending and attacking the enemies pulled to him. This is the only stance a Rogue merc will attack on

Burn (On Some): Your merc will focus primarily on damage, always assisting the main assist. Also during cooldowns they will use agro reducing abilities.

Passive: Your merc will not attack anything.

Balanced: This stance is exactly how it sounds

Burn: Your merc will focus primarily on damage, always assisting the main assist. Also during spell cooldowns they will use agro reducing abilities.

Burn AE (On some): This stance causes your mercenary to focus primarily on damage with AE spells, Always assisting the main assist

Passive: Your merc will not attack anything

Aggressive: If you or any group member is attacked, your merc will attack.

Assist: Your merc will help DPS. He will assist the main assist of the group, or you if its just you and him.

Passive: Your merc will not attack anything.

Balanced: This stance is exactly how it sounds

Passive: Your merc will not attack or heal anything.

Reactive: Your merc will react better depending on the situation.

Efficient: This stance causes your Mercenary to focus primarily on efficiency and preservation of resources.

Healer mercs also have a few extra perks, what I mean by this is rezzing and buffing! The merc will cast a rez (When out of combat) to anyone in your group who is dead. Your merc will also use buffs that are in his level range to buff you and your group.

Also something to keep in mind is if you complete the themes out of order you will not unlock the mercenaries from the theme's below it. What i mean is if you do Field of Scale, you'll have the rank IV merc, not the III or II.

Q: If the Mercenary dies do I have to buy another one?

A: Nope, if he dies the "Suspend" Button on his window will turn to "Revive" and you'll be able to rez your Mercenary. When you rez your mercenary you will immediately be charged the Upkeep cost on him. From the time your mercenary dies to the time you can Rez him is 5 minutes, just like when you'd suspend him.

Q: What happens if I don't have the money to pay for my merc?

A: Your merc will Dismiss himself. This means that you'll have to pay the re-hire charge to get your merc back.

Q: How much better could a Mercenary possibly make leveling? He couldn't have made it THAT easy.

Q: What level do Mercs start charging me money? When do I have to upgrade him?

A: Your merc will start costing you 2g every 15 minutes at level 14. You never have to upgrade your Mercenary, he will level with you. If you're having trouble making your mercenary level with you suspend him and go AFK for a few minutes. When you come back Re-summon him and he will be your level again.

Q: Do I have to have the plat on me to pay the merc? Or will he take it out of my bank?

A: You must be carrying the plat on you in order to pay your merc. The good news is money is now weightless!

Q: Mercs sound great, but I'm just coming back to the game and they sound expensive.

A: Mercs are actually rather cheap to maintain. Usually you can kill 5 or more mobs in the 15 minutes it takes between Upkeep's. You'll make the amount it takes to pay them and more from those 5 mobs. Also you don't have to worry about paying them until around level 12.

Q: Can I bring my merc on a LDoN or my guilds CoA raid?

A: No mercs are not allowed in raid zones or most raid encounters. They are however allowed into LDoN's.

Q: So wait a mercenary is allowed into an LDoN? Do they take up a group slot?

A: Yes they do! So now if you and a friend want to do an LDoN you'll have a group of 4 and will have no need to find a 3rd for the LDoN.

Q: How does shrouding effect my mercenary? Can I keep him when I shroud?

Q: Can I give my mercenary weapons and armor similar to a pet?

Q: I'm the puller for my group but my merc won't stop attacking it when its all the way out in the middle of no where. How do I fix this?

A: Where it shows your vitals aka Health, Mana, Energy. Right click anywhere on this box and select "Puller" as your Main Roll.