Mandrake Root is used in both Tailoring and Alchemy but moreso Alchemy. Due to this reason you'll usually find merchants marked [Alchemy Supplies] that sell the Mandrake Root that we need. As always, if Plane of Knowledge is live on your server I recommend that you purchase the Mandrake Root there.

If you do not have access to the PoK zone yet then I would recommend making a lower level human and purchasing Mandrake Root in East Freeport. Those of you who decide not to take my advice, I have still listed multiple other vendors that sell this item from zones aside from these two places.

The O'Danos brothers are found on the 2nd floor of the Tradeskill buildings between the Guild Lobby and The Bazaar. These NPCs were added into PoK when the zone launches with the Planes of Power expansion pack which means they'll always be here... Unlike our next NPC.

Alchemist Redsa will not be added into Plane of Knowledge until the CoTF expansion I think. Most of the vendors surrounding the small bank aren't there until CoTF so I will assume she shares that same fate.

If Planes of Power isn't live on your server then this is the next best place I recommend you go to purchase Mandrake Root. If you're unfriendly to the humans or traveling this far would be an inconvience to you... Just make a level 1 Human and put money in your Shared Bank.

This'll allow you to still purchase Mandrake Root from this vendor just without all the extra hassal of running here or having to be good faction with the Humans that live in Freeport.

I can really only recommend this NPC to anyone whose a Barbarian. Sven sells a bunch of other Alchemy Reagents and you can raise Alchemy almost completely to 300 just off the stuff he sells. One of those items is of course the Mandrake Root we're after. 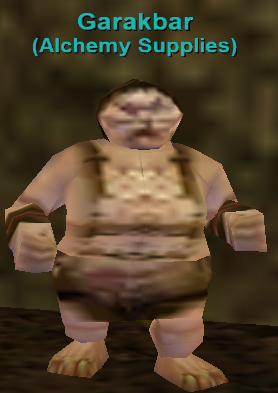